. › Media › News › Rest of the World › Ghana › ReNAPRI Joins ISSER in Congratulating Augustin Fosu on his Nomination to the Committee of Experts on Public Administration of UN Economic and Social Council
14-Jul-2021 | Ghana 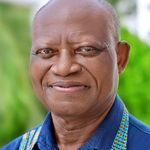 Augustin K. Fosu, Professor at ISSER has been appointed to the Committee of Experts on Public Administration at the United Nations (UN) Economic and Social Council. Professor Fosu joins other renowned experts on the 24-member committee for a four-year term beginning on 1 August 2021 and expiring on 31 July 2025, and will serve in his personal capacity. He also holds a number of honorary appointments, including Extraordinary Professor, Faculty of Economic and Management Sciences at the University of Pretoria, in South Africa; Distinguished Visiting Professor in the College of Business and Economics at the University of Johannesburg, in South Africa; and Research Associate at the Centre for the Study of African Economies at the University of Oxford, in the United Kingdom.

Professor Fosu is a Development Economist with a particular interest in the relationship between institutions, growth and human development; debt, growth and optimal public sector allocation; trade, growth and development; and growth, inequality and poverty.

ReNAPRI joins ISSER in congratulating Professor Fosu on his appointment and wish him all the best in this role.